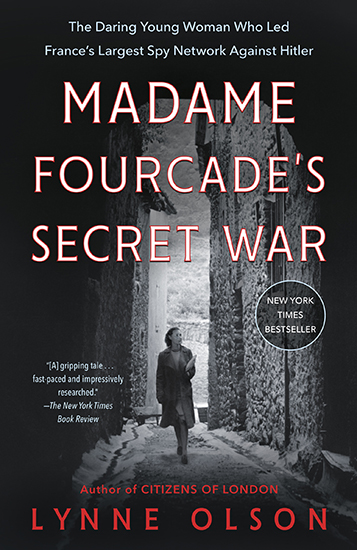 In 1941, Marie-Madeleine Fourcade, a thirty-one-year-old Frenchwoman and mother of two, became leader of a vast Resistance intelligence organization in France—the only woman to emerge as a chef de résistance during the war. Strong-willed, independent, and a lifelong rebel against her country’s conservative, patriarchal society, Fourcade was temperamentally made for the job. Her group’s name was Alliance, but the Gestapo dubbed it Noah’s Ark because its agents used the names of animals as their aliases. The name Marie-Madeleine chose for herself was Hedgehog: unthreatening in appearance, yet a tough little animal that, as a friend of hers put it, “even a lion would hesitate to bite.”

No other French spy network lasted as long or supplied as much crucial intelligence, including providing American and British military commanders with a 55-foot-long map of the beaches and roads on which the Allies would land on D-Day, showing every German gun emplacement, fortification, and beach obstacle along the Normandy coast. The Gestapo pursued Fourcade and Alliance relentlessly, capturing, torturing, and executing hundreds of her three thousand agents. Although Fourcade moved her headquarters every few weeks, constantly changing her hair color, clothing, and identity, she was captured twice by the Nazis. Both times she escaped, once by slipping naked through the bars of her jail cell—and continued to hold her network together even as it repeatedly threatened to crumble around her.

“Fast-paced and impressively researched…Olson writes with verve and a historian’s authority….Marie-Madeleine Fourcade emerges as a vivid and pivotal player in the French Resistance. With this gripping tale Lynne Olson pays [Fourcade] what history has so far denied her. France, slow to confront the stain of Vichy, would do well to finally honor a fighter most of us would want in our foxhole.”
—The New York Times Book Review

“A hell of a yarn…Why the heck have we never heard of Fourcade?…Brava to Lynne Olson for a biography that should challenge any outdated assumptions about who deserves to be called a hero.”
—The Washington Post

“Lynne Olson had added yet another brilliant chapter to her vital historical project: documenting the extraordinary efforts of individuals, such as spymaster Marie-Madeleine Fourcade, who helped liberate twentieth-century Europe form Nazi occupation. Much like Madame Fourcade herself, Olson goes to great lengths to unearth truth and preserve dignity for those who lived and died during Hitler’s reign of terror.”
—Madeleine K. Albright, former Secretary of State

It was the middle of the night.

The air in the barracks detention cell was hot and sultry—typical July weather for the southern French town of Aix-en-Provence. Not surprisingly, the woman lying on the cot was bathed in sweat. But the reason wasn’t just the stifling heat. It was also fear. A few hours earlier, she had been captured by the Gestapo while combing through intelligence reports from her resistance network.

The Germans who had taken her captive knew she was an Allied spy, but they had no idea of her true identity. According to her papers—forged, of course—she was a French housewife named Germaine Pezet. Dour and dowdy, she wore spectacles, was drably dressed, and had lusterless, jet-black hair. It was the latest of her many disguises, this one concocted in part by a dentist in London who had made the dental prosthetic that had helped transform her appearance. No outward trace remained of the chic blonde Parisienne she’d been before the war—a woman born to privilege and known for her beauty and glamor.

For Marie-Madeleine Fourcade, those prewar years seemed like ancient history. Immediately after the German occupation of France, she’d joined the resistance—part of a “minute elite,” as Kenneth Cohen, a top British intelligence official and close friend of hers, called the comparative handful of French men and women who rose up in 1940 to defy the Nazis.

In 1941, at the age of 31, she became la patronne—the boss—of what would emerge as the largest and most important Allied intelligence network in occupied France. Throughout the war, it supplied the British and American high commands with vital German military secrets, including information about troop movements; submarine sailing schedules; fortifications and coastal gun emplacements; and the Reich’s new terror weapons, the V-I flying bomb and the V-2 rocket.

Over the course of the conflict, Fourcade, the only woman to head a major resistance network in France, commanded some 3,000 agents, who infiltrated every major port and sizable town in the country. They came from all segments of society—military officers, government clerks, architects, shopkeepers, fishermen, housewives, doctors, artists, plumbers, students, bus drivers, priests, members of the aristocracy, and France’s most celebrated child actor. Thanks to Marie-Madeleine’s determined efforts, almost twenty percent were women—the highest number of any resistance organization in France.

Her group’s formal name was Alliance, but the Gestapo called it Noah’s Ark because its agents used the names of animals and birds as their aliases. Marie-Madeleine had come up with the idea and assigned each agent his or her nom de guerre. Many of the men bore the names of proud and powerful denizens of the animal and avian kingdoms: Wolf, Lion, Tiger, Elephant, Fox, Bull, Eagle, to name a few. For her own code name, she decided on Hedgehog,

On the surface, it seemed an odd choice. A beguiling, bright-eyed little animal with prickles all over its body, the hedgehog was—and is—a beloved figure in classic children’s books. In Alice in Wonderland, hedgehogs are used as croquet balls by the Queen of Hearts. In Beatrix Potter’s stories about Peter Rabbit, one of her most endearing characters is a hedgehog named Mrs. Tiggie-Winkle, who was based on Potter’s own pet hedgehog.

But the hedgehog’s unthreatening appearance is deceiving. When challenged by an enemy, it rolls up in a tight ball, which causes all the spines on its body to point outwards. At that point, as a friend of Marie-Madeleine’s once noted, it becomes “a tough little animal that even a lion would hesitate to bite.”

Until July 1944, Marie-Madeleine Fourcade, like the hedgehog, had managed to elude her foes. Many others in her network had not been as fortunate. For the previous year and a half, the Gestapo had engaged in a full-scale offensive to wipe Alliance out. Hundreds of her agents had been swept up in wave after wave of arrests and killings; whole sectors had been annihilated. In the summer of 1944, Fourcade had no idea how many of her people were still alive. Dozens, including some of her closest associates, had already been tortured and executed.

After each crackdown, the Gestapo was sure they had destroyed the group. But they had not reckoned with its leader’s resourcefulness and fierce persistence. Every time a regional circuit was decimated, she managed to cobble together a new one.

In Aix-en-Provence, however, it appeared that her luck had finally run out. After her arrest, she’d been told that a high-ranking Gestapo official was coming from Marseille the following morning to question her. When he arrived, she knew that her real identity would almost certainly be discovered. She feared she would be unable to withstand the brutal interrogation and torture to which she would be subjected before her execution. Briefly, she considered swallowing the tablet of cyanide she’d been given in London in anticipation of such a moment.

But she knew that the end of her life would likely mean the end of Alliance as well. After all the contributions her network had made to the Allied war effort, including to the success of the D-Day landings just a month before, Fourcade couldn’t abide the idea of its destruction. She had to find a way to escape.