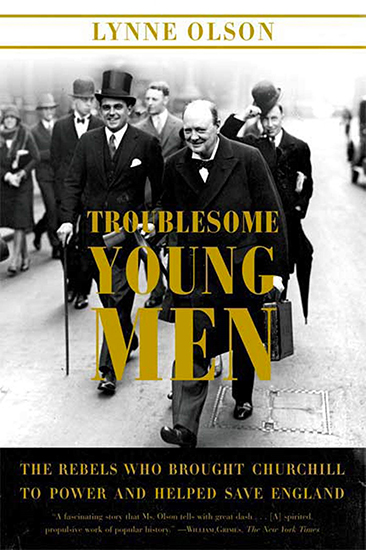 The Rebels Who Brought Churchill to Power and Helped Save England

On May 7, 1940, the House of Commons began perhaps the most crucial debate in British parliamentary history. On its outcome hung the future of Prime Minister Neville Chamberlain’s government and also of Britain—indeed, perhaps, the world. Troublesome Young Men is Lynne Olson’s fascinating account of how a small group of rebellious Tory MPs defied the Chamberlain government’s defeatist policies that aimed to appease Europe’s tyrants and eventually forced the prime minister’s resignation.

Some historians dismiss the “phony war” that preceded this turning point—from September 1939, when Britain and France declared war on Germany, to May 1940, when Winston Churchill became prime minister—as a time of waiting and inaction, but Olson makes no such mistake, and describes in dramatic detail the public unrest that spread through Britain then, as people realized how poorly prepared the nation was to confront Hitler, how their basic civil liberties were being jeopardized, and also that there were intrepid politicians willing to risk political suicide to spearhead the opposition to Chamberlain—Harold Macmillan, Robert Boothby, Leo Amery, Ronald Cartland, and Lord Robert Cranborne among them. The political and personal dramas that played out in Parliament and in the nation as Britain faced the threat of fascism virtually on its own are extraordinary—and, in Olson’s hands, downright inspiring.

“Brisk, engaging….A fascinating snapshot of the Tory ‘rebels.’… The strength of Olson’s book is how well she writes of the human element in politics and diplomacy.”
—Jon Meacham, The New York Times Book Review

“Ms. Olson vividly recreates the climate of suspicion and hostility that surrounded the troublesome young men, a tiny minority with a seemingly hopeless cause….It is a fascinating story that Ms. Olson tells with great dash.”
—William Grimes, The New York Times

“An unexpected page-turner about the group of young Tory MPs whose tenacious rebellion…leaves you longing for such political courage today.”
—Tina Brown, The American Spectator

“[A] riveting book… Olson tells her story with verve, never letting the reader forget what was really at risk—and what might have happened if these particular troublemakers hadn’t been so willing to stir the political pot.”
—The Atlantic Monthly

“A well-written, fast-paced book that reads like a political thriller… Troublesome Young Men is an extraordinary tale of political courage in perilous times–and a wonderfully written book.”
—Christian Science Monitor

“Gripping…. Recounted with such journalistic flair that it constantly feels fresh. Olson elegantly brings this political milieu to life.”
—The Guardian (UK)

“Infused with the sense of urgency felt by the young Tories, Olson’s vivid narrative of a critical generational clash leaves the reader wondering what might have happened had they prevailed earlier on.”
—Publishers Weekly (starred review)

“Engrossing…. Olson does a superb job of capturing the smoke-filled, whiskey-soaked ambience of British politics and the web of personal relationships involved.”
—Library Journal