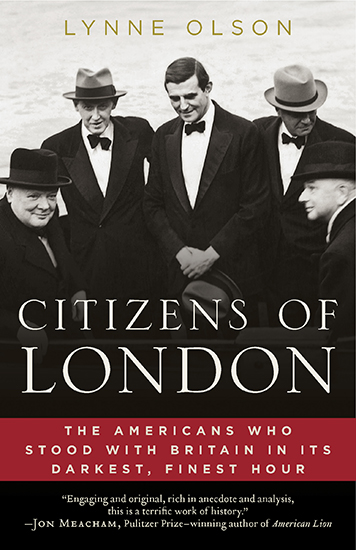 The Americans Who Stood With Britain in Its Darkest, Finest Hour

Citizens of London is the behind-the-scenes story of how the United States and Britain forged their crucial wartime alliance, as seen from the viewpoint of three key American players in London. Drawing from a wide variety of primary sources, Lynne Olson depicts the personal journeys of these men, who, determined to save Britain from Hitler, helped convince a cautious Franklin Roosevelt and reluctant American public to back the British at a critical time.

The three —Edward R. Murrow, the handsome, chain-smoking head of CBS News in Europe; Averell Harriman, the hard-driving millionaire who ran FDR’s Lend-Lease program in London; and John Gilbert Winant, the shy, idealistic U.S. ambassador to Britain – formed close ties with Winston Churchill and were drawn into Churchill’s official and family circles. So intense were their relationships with the Churchills that all of them were involved romantically with members of the prime minister’s family: Harriman and Murrow with Churchill’s daughter-in-law, Pamela, and Winant with his favorite daughter, Sarah.

Citizens of London, however, is more than the deeply human story of these three Americans and the world leaders they aided and influenced. It’s a compelling account of the transformative power of personal diplomacy. Above all, it’s a rich, panoramic tale of two cities: Washington, D.C., a lazy Southern town slowly growing into a hub of international power, and London, a staid, class-conscious capital transformed by war into a vibrant cosmopolitan metropolis, humming with energy, romance, excitement, and danger. To a number of Americans who spent time in wartime London and the rest of Britain, the country seemed like a kind of Brigadoon—a magical place where courage, resolution, sacrifice, and sense of unity and common purpose triumphed, if only for a few short years.

“A triumph of research and storytelling… history on an intimate level.”
—Walter Isaacson, author of The Code Breaker and Leonardo da Vinci

“In this engaging and original book, Lynne Olson tells the story of the Americans who did the New World credit by giving their all to help Churchill’s Britain hold on against Hitler. Rich in anecdote and analysis, this is a terrific work of history.”
—Jon Meacham, author of American Lion: Andrew Jackson in the White House

“Citizens of London is a great read about a small band of Americans and their courageous role in helping Britain through the darkest days of early World War II. I thought I knew a lot about that dangerous period but Lynne Olson has taught me so much more.”
—Tom Brokaw, former NBC News anchor and author of The Greatest Generation

“If you don’t think there’s any more to learn about the power struggles, rivalries and dramas—both personal and political—about the US-British alliance in the World War II years, this book will change your mind—and keep you turning the pages as well.”
—Jeff Greenfield,  former Senior Political Correspondent, CBS News