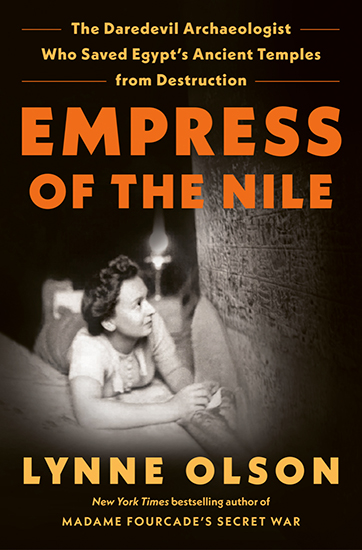 Empress of the Nile

In the 1960s, the world’s attention was focused on a nail-biting race against time: an attempt to rescue more than a dozen priceless Egyptian temples from drowning. But the massive press coverage of this remarkable rescue effort—the greatest of its kind in history—completely overlooked one essential element of the story: the gutsy French woman archaeologist who made it happen.

Without the intervention of Christiane Desroches-Noblecourt, the temples—including the Metropolitan Museum’s Temple of Dendur—would now be at the bottom of a gigantic reservoir. A project of almost unthinkable magnitude and complexity, the rescue initially was dismissed as a fool’s errand by virtually everyone. Its enormous engineering challenges were compounded by the towering political difficulties of urging worldwide cooperation during an especially dangerous spike in Cold War tensions.

Desroches-Noblecourt refused to accept that verdict. A willful, real-life version of Indiana Jones, she refused to be cowed by anything or anyone. She’d already had plenty of experience dealing with powerful men who didn’t take her seriously. In the macho, rough-and-tumble world of archaeology, women were an extreme rarity, and she’d been shunned and harassed since her earliest days in the field. “You don’t get anywhere without a fight, you know,” she once told an interviewer. “I never looked for the fight. If I became a brawler, it was out of necessity.”

Throughout her career, Christiane Desroches-Noblecourt resembled nothing so much as a female action hero come to life. A woman who swaggered. A woman who talked and fought back. A woman who owned her power.

“Lynne Olson’s many fans know her gift for storytelling and bringing to life heroes who may not be well known but demand—indeed, rivet—our attention. Who else but Olson could have found Christiane Desroches-Noblecourt, a beautiful and brave French resistance fighter who is brazen enough to tell her Gestapo interrogators to stand up when a woman enters the room? Who also happens to be a kind of female Indiana Jones working behind the scenes—alongside Jackie Kennedy!—to save the ancient temples of Egypt? Readers will devour this wonderful book.”
—Evan Thomas, New York Times bestselling author of First: Sandra Day O’Connor

“Once again, Lynne Olson introduces us to a modern heroine who defied the odds and achieved historic results. Through sheer grit and an indomitable spirit that neither Nazis nor bureaucrats from Paris to Cairo could tame, Christiane Desroches-Noblecourt rescued the Egyptian Temples of Nubia and other treasures from drowning. With her signature deep research and compassion for quirky characters, Olson spins an inspiring tale with a sometimes surprising cast, including First Lady Jacqeuline Kennedy. Empress of the Nile is a tonic for our times and a reminder that one unstoppable woman can bend history to her will.”
—Kati Marton, New York Times bestselling author of The Commander: The Remarkable Odyssey of Angela Merkel

“An exhilarating, in-depth look at a woman whose courage never faltered, whether facing Nazi interrogators, back-stabbing archeologist colleagues, or the imminent destruction of the Egyptian monuments and artifacts she held most dear. Olson’s richly detailed biography takes the reader for a magnificent ride in this heart-stopping read.”
—Fiona Davis, New York Times bestselling author of The Magnolia Palace

“Christiane Desroches-Noblecourt was one of the leading Egyptologists of the 20th century, yet her remarkable achievements have received little attention. Lynne Olson has done her justice with this comprehensive biography.”
—Toby Wilkinson, New York Times bestselling author of The Rise and Fall of Ancient Egypt and Tutankhamun’s Trumpet

“From facing down Nazis, to fighting to save Egyptian artifacts, to rehabilitating the reputation of Hapshetsut, Desroches-Noblecourt’s remarkable career reads like something out of fiction—but Lynne Olson’s compelling biography makes clear that every word is pure fact. Empress of the Nile is the best sort of micro history: both an intimate portrait of a groundbreaking woman and a whirlwind tour through the major events and personalities of the twentieth century.”
—Lauren Willig, New York Times bestselling author of Band of Sisters

Q: Most of your previous books have been about some aspect of World War II. Your new one is very different: it focuses on archaeology and ancient Egypt. What’s the reason for the shift?

Actually, when I started thinking about this book, my first impulse was to find another subject dealing with the war. With that in mind, I began researching the first organized resistance network in occupied France. As I learned more about the group, I became fascinated by the story of one of its women members—a feisty young archaeologist named Christiane Desroches-Noblecourt, who was the acting chief curator of Egyptian antiquities at the Louvre. During the war, she led a double life, working at the museum during the week while involved with the resistance at night and on the weekends.

As I found out more about her and her achievements, particularly after the war, I realized what a bold, trailblazing, history-making woman she’d been. So I dropped my idea of writing about the network and decided to concentrate only on her, with the primary focus on her seemingly hopeless campaign in the 1960s to save several ancient temples in Egypt from being destroyed. That crusade, as it turned out, led to the greatest instance of international cultural cooperation the world has ever known.

Q: You refer to Desroches-Noblecourt as a female version of Indiana Jones. Why? How would you describe her?

Like the fictional Indiana Jones, she was a highly skilled archaeologist who sought out danger and adventure and became involved in seemingly hopeless quests. A natural-born rebel all her life, she defied society’s unwritten rules about the proper roles for women. She refused to be intimidated by anyone. Late in her life, she told an interviewer, “You don’t get anywhere without a fight, you know. I never looked for the fight. If I became a brawler, it was out of necessity.”

Q: Throughout the book, you mention the misogyny Desroches-Noblecourt faced as one of the very few women in the macho world of Egyptian archaeology. Can you tell us more about that? How did she deal with it?

As was true in other countries, Egyptology in France was an exclusive men’s club throughout much of the twentieth century, and most of those in the club clearly wanted it to remain that way. Women were an extreme rarity, and, as one of the female pioneers in France, she had been shunned and harassed since her earliest days in the field. In 1938, when she was named the first female fellow of the French Institute of Oriental Archaeology, an elite Cairo-based research center for the study of ancient Egypt, her male colleagues rose up in revolt, refusing, she later said, to “share the library or even the dining room with me. They said I would collapse and die in the field.”

She dealt with it by working harder than anyone else. She was a woman of enormous energy and enthusiasm, with an an unshakable belief that she was as good as any man. At the same time, it’s obvious from some of the things she said throughout her career that the ferocious work ethic she displayed was prompted, at least in part, by the mindset that, in order to prove herself, she had to devote virtually every minute of every day to her work.

Q: Can you tell us more about about her campaign to save the Egyptian temples?

It began in the late 1950s, after the president of Egypt, Gamal Abdul Nasser, announced plans to build a massive new dam near the town of Aswan. The dam was meant to provide enough water and electricity for Egypt’s rapidly exploding population, but in the process, its flood waters would swallow up more than twenty spectacular temples, built thousands of years earlier during the most glorious period of pharaonic history. Desroches-Noblecourt insisted that they be rescued. What she proposed was a project of almost unthinkable magnitude and complexity. The enormous engineering challenges were compounded by the political difficulties of urging worldwide cooperation during a dangerous spike in Cold War tensions. In a world growing increasingly divided, the project was regarded as quixotic and hopelessly delusional.

Yet, thanks in large part to her pugnaciousness and determination, more than fifty countries did in fact come together in the nick of time to save the temples. It turned out to be the most important archaeological rescue operation in history.

Q: One of the most interesting aspects of your book is the fact that Desroches Noblecourt was not the only woman who played a crucial role in saving the temples. Jacqueline Kennedy was also heavily involved. Did you know about her involvement when you began working on the project?

I had no idea at all until I was well into my research. In 1961, as America’s new First Lady, Jackie Kennedy was responsible for persuading her husband to reverse U.S. opposition to help preserve the temples. Thanks to her influence, President Kennedy, just in time, called on Congress to authorize enough money to insure their rescue.

There’s a wonderful kicker to this story: she and Desroches-Noblecourt met each other for the first and only time in 1973, but apparently neither had any idea that the other had been a key participant in the fight. Both had worked largely behind the scenes, and neither had received much if any public attention at that point for what they had done. Indeed, Jackie Kennedy had insisted that her activism not be publicized, and as a result, her role is still largely uncelebrated today. But even though she never talked in public about her work, she took enormous pride in what she had accomplished, telling her daughter, Caroline, that her successful efforts to save the temples meant as much to her as her restoration of the White House.